Siena is a wonderful place for a wedding, as a wedding planner I think it’s one of my favourite venues in Tuscany, plus I live here so am slightly biased! It’s smaller than Florence and so less chaotic, with its beautiful buildings, the magnificent duomo (cathedral) and the most impressive shell shaped piazza, Piazza Del Campo a  definite WOW factor and perfect backdrop for wedding photos. This is where the famous horse race (il Palio) takes place over 4 days in July and August each year. It is here that weddings take place in the Palazzo Publicco the town hall (which is also a museum) in the Sala di Razze a spectacular deep red room, with Murano glass chandliers where the 9 Governors of the Republic of Siena met to make important decisions, so it’s rather apt that weddings take place in this historical room.

Helen & Nick had their wedding here in Siena last August surrounded by family and friends, but our story starts almost 18 months before the wedding. Nick and Helen contacted me to be their wedding planner help as not speaking the language they realized that if they were going to pull off the perfect wedding unless they had some expert help. After the initial emails they flew out to have a look at some potential venues, as we whizzed through the Tuscan countryside looking at villas and agriturismos (farm holidays) for them and their guests to stay and potential wedding ceremony venues I knew that working with them was going to be fun and that we would become good friends and I wasn’t wrong. 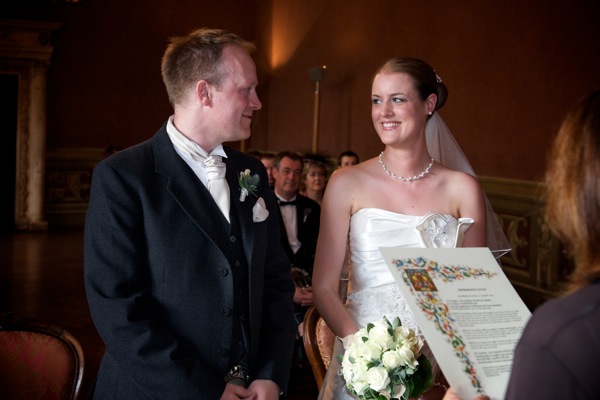 Helen & Nick had some clear ideas about what they wanted, a definite was a Scottish piper, not a problem to organize as there is a real live Scottish piper living in Tuscany, I suggested that it would be fun for Nick and the guest to be piped through the streets to the Piazza, a complete surprise for the guests but they all throughly enjoyed themselves as they walked through the streets and people came out of shops to see what was happening and to shout  “auguri” (congratulations) as they passed by.  After the ceremony the Piper piped the guests a full turn round the piazza before heading off back to the bus to return to the villa. Something I’m sure that the guests will never forget especially the girls with high heels! 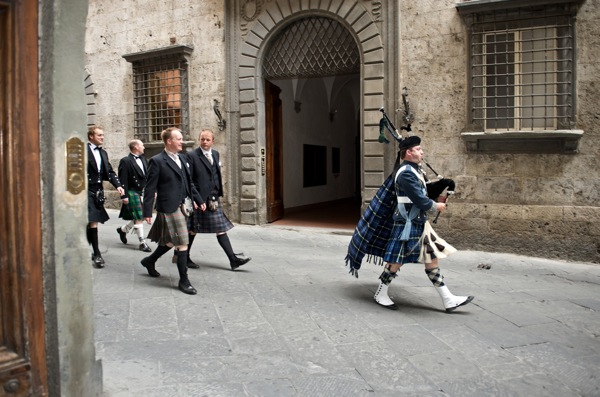 Nick and Helen came out for a second visit in February to do a tasting for the wedding breakfast, meet the florist and for Helen to have a hair trial at the hairdressers. I met them on a Sunday evening in the Piazza and then headed off to meet with the florists and discuss the flower requirements, Helen brought some ideas with her and wanted beautiful white roses so we discussed how we could develop the idea to put an Italian twist to it and returned to the Piazza for a few drinks and dinner. 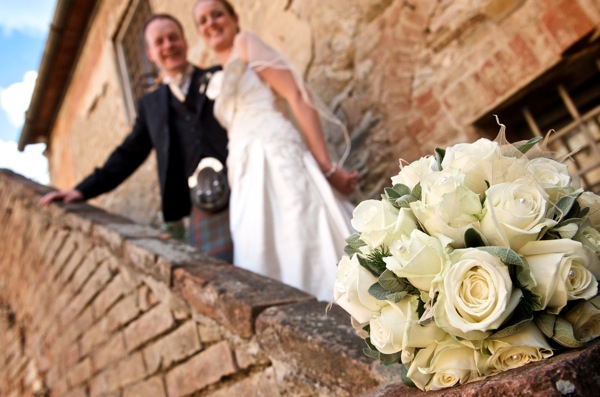 The following morning when I went to pick them up to go over to Cortona I was happy to see that they too were feeling a little worse for wear! I love going to the showroom with couples, it’s like a sweetshop there are so many wonderful things to chose from, lots of different colours and styles, after an hour and half of trying different looks, Helen decided that white would win the day! And so onto the tasting, the hard work was choosing the wine, thankfully I was driving but I could see that it wasn’t going down as well as it should do!!  But after some delicious food and a decision on the final menu, Nick got his second wind and had a grappa to finish off his lunch. Way to go Nick you’re a better man than me!

The following day we had the hair trial, as Helen was having an up do, she bought her pet rat with her (actually a hair roll) to make the bun look bigger, we had some very strange looks from the hairdresser who doesn’t speak English as we collapsed into a fits of giggles over the rat…!

They went home and the emails continued until they came out for the wedding, after the verbal hearing they were free to spend time with their guests and I organized a wine tasting tour for them in the afternoon and while they were enjoying themselves I sorted out car hire for one of the guests.

On the morning of the wedding, I met Helen and the girls at the hiardressers and then went to pick up a beautiful bouquet of roses and a surprise picnic that Nick had asked me to organize for Helen, so romantic I love it when the grooms do something so unexpected. Then headed up to the villa, organized the caterers and made sure that Nick wasn’t too nervous.

At 2pm we herded the guests onto the bus and set off for Siena, Helen followed with her dad and her bridesmaids a little later.

Weddings are always emotional and there were a few tears during the ceremony, after spending so much time getting to know the couples during the planning process I always feel a lump in my throat when the bride comes in and watching Nick as Helen came in was no exception. The wedding ceremony was lovely and the registrar asked if she could read and dedicate a poem to them, again another thoughtful touch that makes getting married in Tuscany so special.

After the wedding they headed back to Villa Catignano for the wedding party, aperitivo and harpist in the Italian gardens. 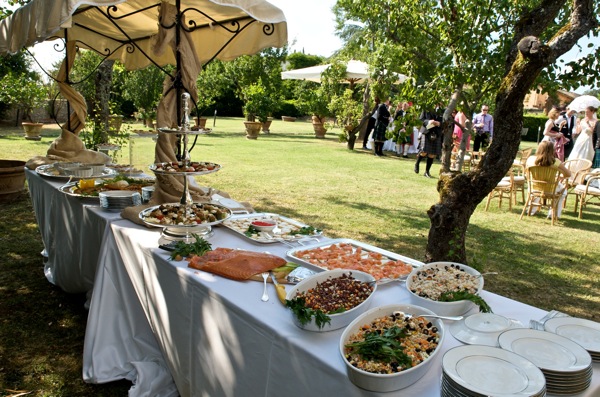 Followed by dinner in the courtyard, beautifully set up with yes…..white umbrellas, white table linens and crockery and with the tall martini glasses filled with fabulous crisp white roses it all looked stunning. 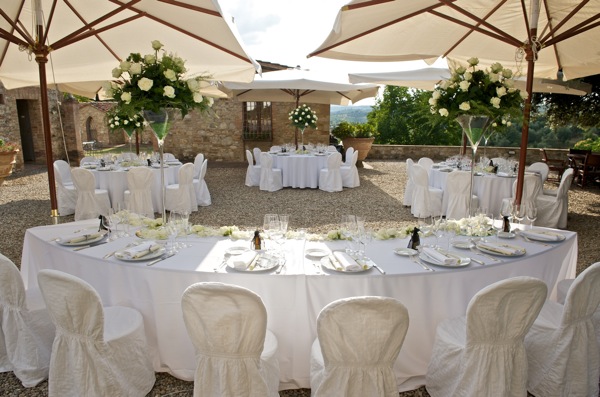 As the tables were surprisingly named after Italian wines, I devised this table seating plan for them. 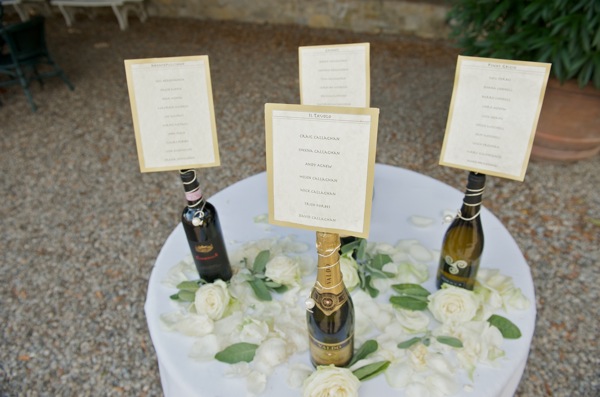 And so the happy couple made their entrance…. 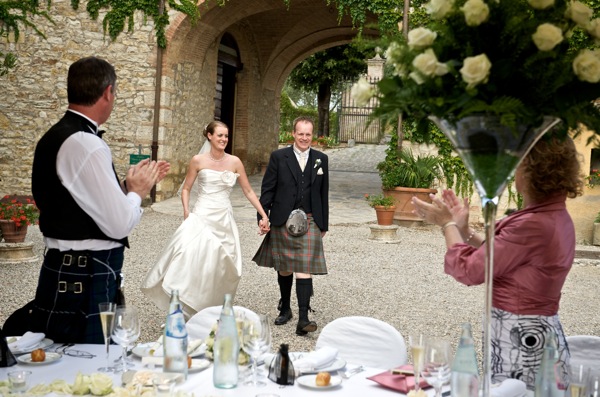 and after a wonderful wedding breakfast they headed into the Tanaia to dance the night way… the perfect end to a perfect day…another successful Marry Me in Tuscany wedding.