Casey & Phil chose Castellina in Chianti as their wedding destination, and they asked Marry Me In Tuscany to be their wedding planner. 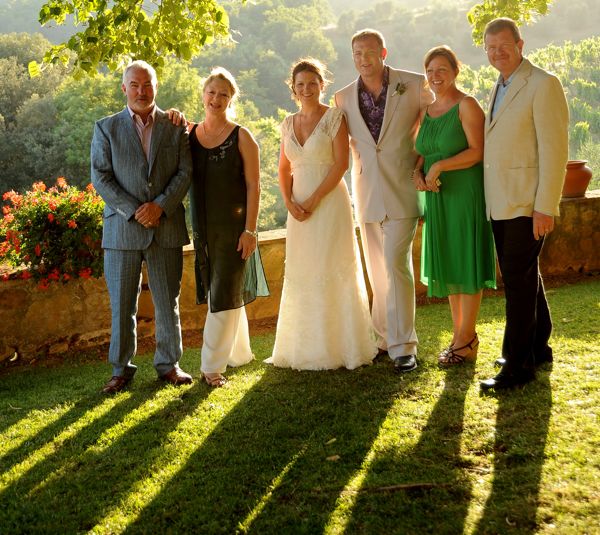 I first met up with Phil, Casey, Jackie, Charlie (Casey’s mum & dad) and Bob & Jo (Phil’s mum & dad)  as seen in the photo above, at Dievole their chosen wedding venue and then we set off to view potential wedding venues for the civil ceremony. We dashed from Radda in Chianti, Castellina in Chianti and Siena stopping on the way for a long lunch and at the end of the day over a glass of Novecento back at Dievole they decided that Castellina in Chianti was the place for them, more relaxed, more low key than Siena but nothing was low key for their wedding!

Emails continued, they all came out several times before the wedding, to finalize details and Jackie took these opportunites to bring out cases full of things for the wedding which she left in storage at Dievole for the big day ranging from butterflies to decorate the marquee, games for the children, a tea set for the table decorations and fans for all the ladies. It was lovely to see that the grooms parents were included in all decision and they were all thoroughly enjoying being involved in the planning of their childrens’ wedding.

The week of the wedding and over 90 guests arrived at various stages to enjoy the pre-wedding barbeque and wine tasting tour that was organized for them. Everyone was in very high spirits and were all determined to have a great time. They had exclusive use of Dievole so there were no worries of upsetting other guests with their high spirits and late nights.

After the verbal hearing I went back to Dievole and helped Jackie make the bombonieri (bags of sugared almonds) for the ladies, and to drop off the bag of small Chianti bottles I’d got for them for the men.

The day of the wedding arrived, the hairdresser arrived and as Casey had already had a trial on a previous visit he set to work on Casey and the bridesmaids and the mums, all very relaxed, Andrea the photographer arrived and started capturing those important preparation moments, and I decorated the car, a beautiful Austin Healy which Charlie had driven down from England especially for the occassion.

The flowers arrived, Casey had chosen these beautiful Picasso calla lillies with lavender. 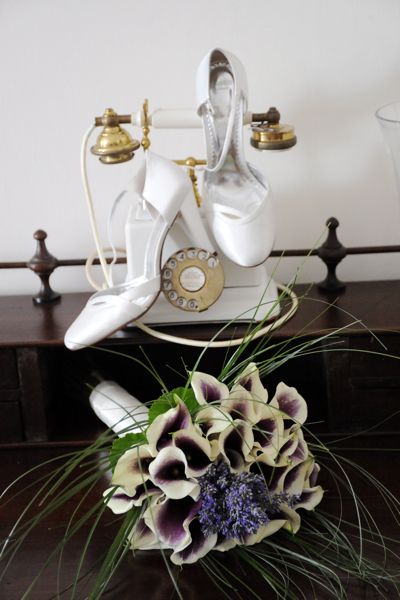 Jackie and her friend started to put together the table centre pieces using the tea cups as the holders for the flowers. The finished result was amazing. 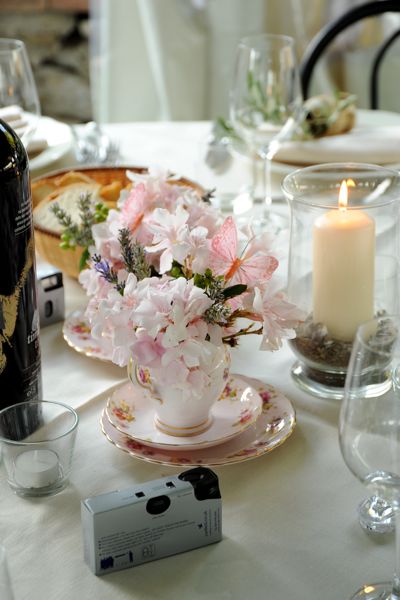 The bus arrived to take Phil and all the guests to the wedding, and all the ladies were given fans to keep them cool in the heat as they boarded the bus. Meanwhile back in Casey’s room, Charlie was giving Casey some dutch courage! The bottle was passed round and we all had a slug of the hard stuff.. 😉 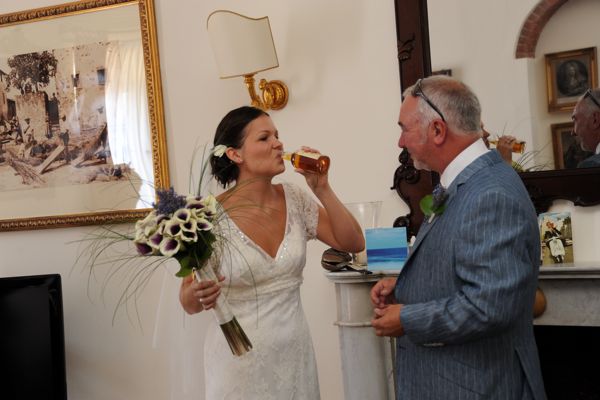 a little snifter to calm those pre wedding nerves!

And then it was time to go, I love this photo of Casey and her mum Jackie going down the stairs, Casey looks like she can’t wait to get there! 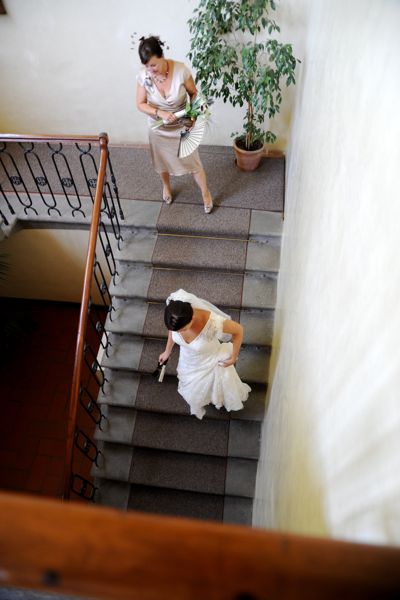 And so we all arrived in Castellina in Chianti,  weddings here take place in this beautiful Castle (the Rocca). 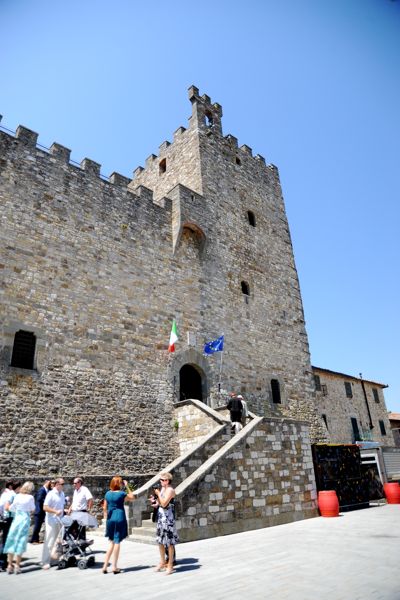 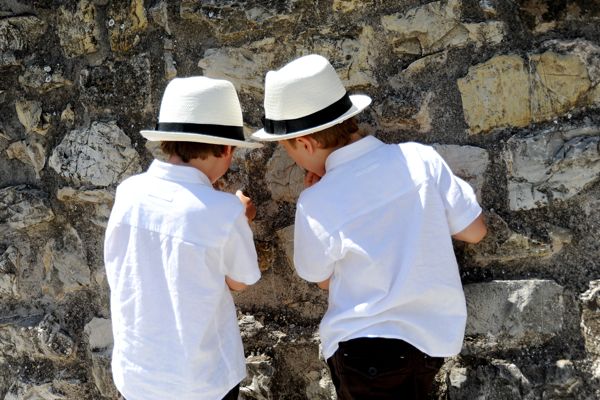 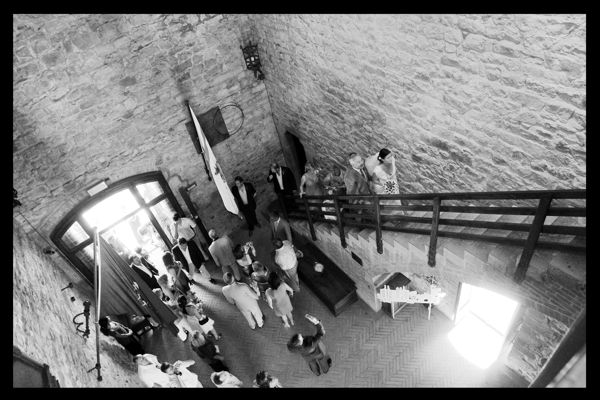 As you can see from the next photo, the room was packed to the rafters with friends and family who had come to witness Casey and Phil get married in Tuscany, a wonderful atmosphere for a very special couple. 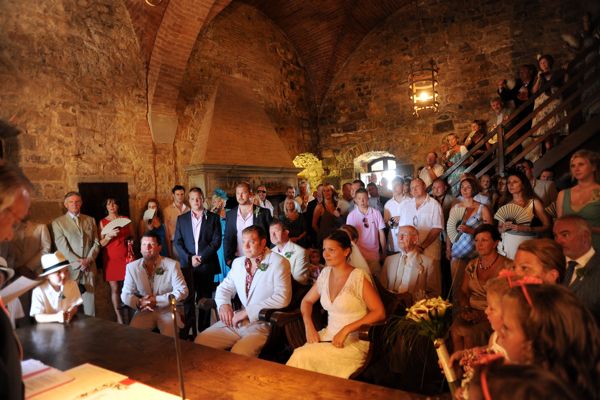 After the wedding ceremony, Casey & Phil went up to the roof top with their guests to enjoy the view over the Tuscan country side and have a few photos taken.. 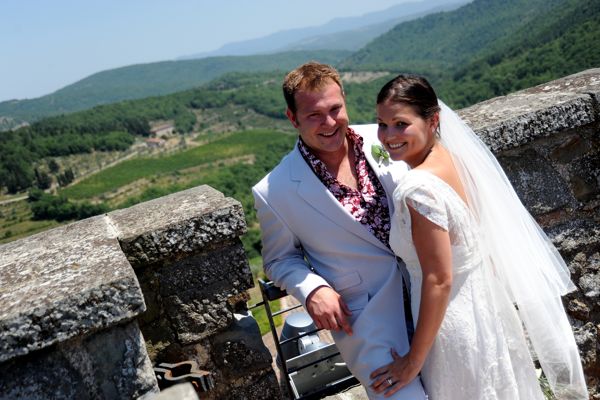 And then it was on to the bar in the centre of Castellina in Chianti for a few beers and some light snacks. 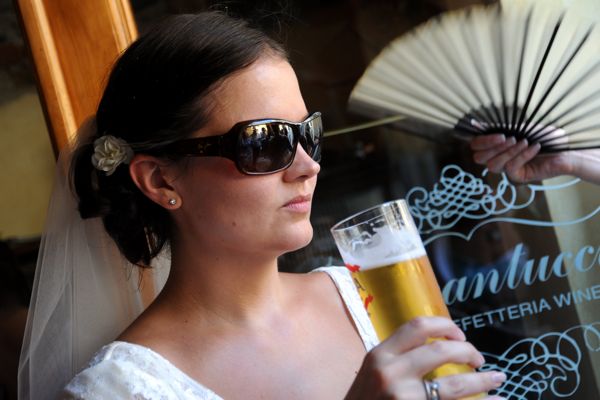 Then it was time for all the guests to get on the bus and head back to Dievole and for Phil to drive Casey back in the Austin Healy, the plan was that we would stop on the way for some photos, but the best laid plans of mice and men meant that we found Casey and Phil back at Dievole tucking into some chilled wine, way to much fun on your wedding day, so we whisked them off into the vineyard for some quick shots. 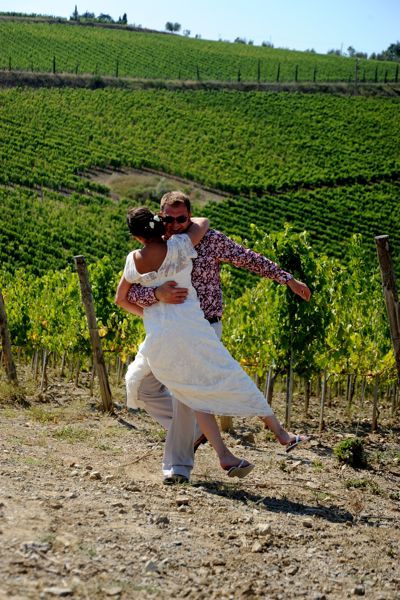 They headed back before the guests arrived so they would be there to greet them. 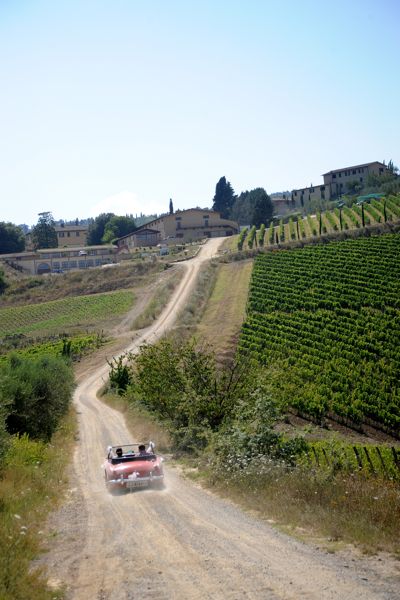 Everyone then tucked into the aperitivo organized on the lawn in front of the villa accompanied by an accordian and mandoline which added the Tuscan touch to the festivities. 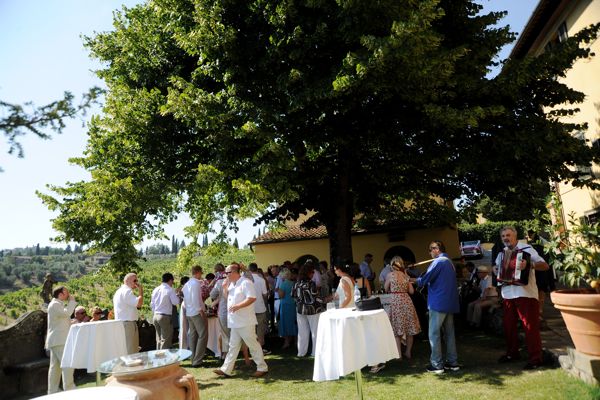 A dip in the pool for some guests proved a good way to cool down before dinner Casey and Phil disappeared only to reappear moments later on the balcony for an impromptu photo opp they even looked like royalty up there..! 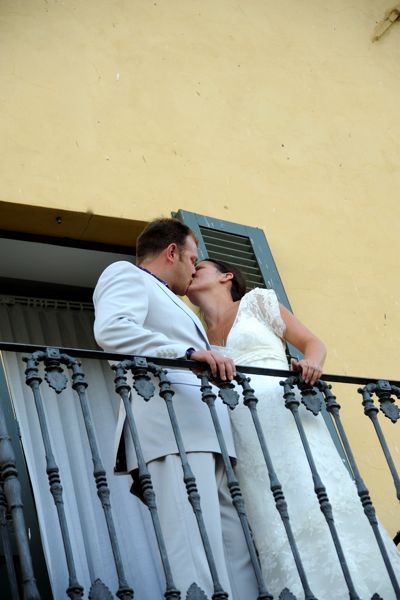 A delicious dinner created by resident chef Enzo was washed down by Dievole’s own wines Novecento is my personal favourite, rich and fruity and then to finish the wedding cake made of cheese, with a selection of knives to cut it! 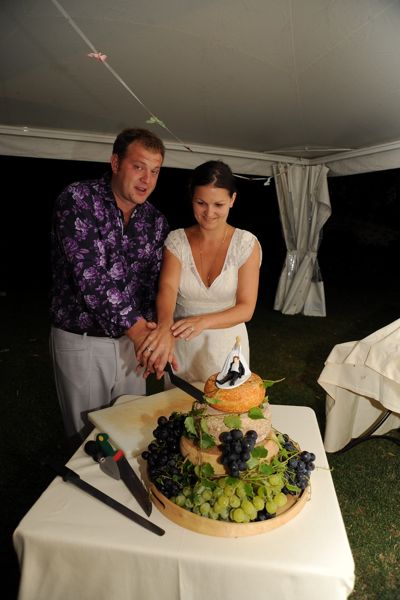 The fun then continued with dancing to the fab wedding duo Guty & Simone, and in the very early hours of the morning everyone headed off to bed after a wonderful day, another successful Marry Me in Tuscany event.

Phil & Casey now have a beautiful daughter called Siena, and hope to come back to Tuscany later this year to show her the city after which she was named.