Abbie & Alex – Tuscan Wedding – “a moon on a stick venue”

Abbie & Alex – Tuscan Wedding – “a moon on a stick venue”

Marry Me In Tuscany pulled off an absolutely perfect wedding last Sunday for Abbie & Alex at a secret location in Tuscany. Abbie had booked her wedding venue before contacting me and having never visited Tuscany before gave me the brief that she wanted a small chapel in a country location for her wedding.

Not a tall order at all you may think, Tuscany is just beautiful rolling green hills but Tuscany is the size of Wales and just as diverse, with the seaside, mountains for skiing, lakes woods and a few rolling green hills,  the picture postcard Tuscany that most people associate with it has been so cleverly advertised, who hasn’t seen a photo of these famous trees at some time when looking at calenders and images of Tuscany? The problem is that the Val D’Orica where most of these images come from is over an hour away from the place they were staying near the coast. 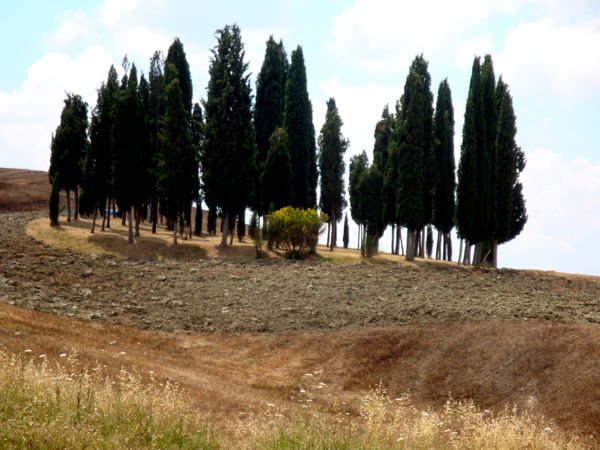 As lovers of the countryside it was important to them that they had a country wedding where the emphasis was on the beautiful countryside oh and a cute little chapel too! I initially sent Abbie some ideas but unfortunately even the little tiny Tuscan villages weren’t what she was hoping for so the search was on to find what became affectionately known as “the moon on the stick” venue.

After some searching and pulling in favours from friends I eventually found it, an absolute gem, a gorgeous little hamlet with a beautiful little chapel that would be perfect for Abbie & Alex and their 12 guests, secluded, surrounded by countryside and fabulous views. A place that is so special I thought Abbie was going to cry with joy when she saw it for the first time when they popped over for a quick visit to check it out.

The wedding plans continued over the months leading up to the wedding, and the week before the wedding Abbie popped over with her lovely mum Pauline for hair and make up trials and to finalize the flowers for the wedding ceremony and wedding dinner. While she was out here, Pauline was caught whispering to me about a couple of surprises that they’d like to arrange for Abbie & Alex, fortunately the secrets stayed secret as one of these was that Anne & Fred close family friends wanted to organize a couple of doves that they could set free when they came out of church, I’m no bird lover I have to say, but I found some doves in a beautiful white heart shaped basket, some helium for the balloons and some rose petals for the confetti, have to say that was the easiest one to arrange!

On the day of the wedding, I met Matteo who handed over the doves, assured me that they wouldn’t escape in the car while I was driving, my main concern was that one of them would kick the bucket on the way there as it was so hot  and then we’d have a comedy moment where the poor thing is launched and then immediately hits the ground, but they arrived in one piece although I’m not sure they appreciated my taste in music which was turned up so I couldn’t hear them cooing!

The little convoy set out from Siena to the “moon on the stick” venue and where we waited for Abbie and her mum to arrive as they were being driven over in style from Conti San Bonifacio wine resort where they were staying and where they would be holding the wedding celebrations later that evening.

Laurence & Salvatore set about making Abbie & Pauline look a million dollars and Silvia worked her magic with the flowers in the chapel and Bridget & Simona were in the kitchen preparing a scrumptious  light lunch that would be served after the ceremony. Amy the fab photog arrived and started snapping away and then the lovely Aldo, a talented pianist arrived followed by the wedding celebrant which completed the team for the day.

How gorgeous does the chapel look? Glorious white hydrengeas with varigated ivy transformed these majestic candelabras, the overall effect was stunning. 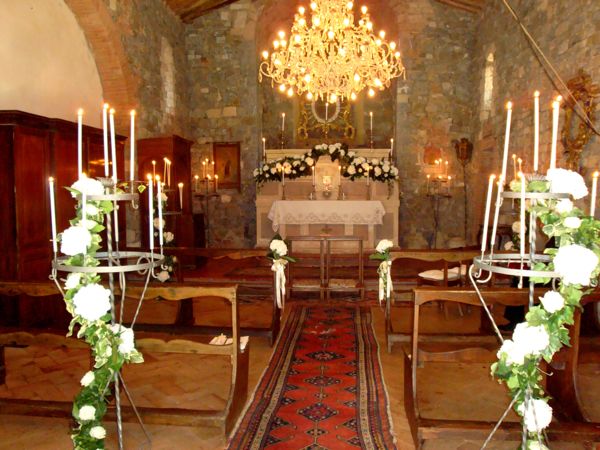 The wedding ceremony was at 1pm so right on time Alex arrived with they’re guests including 98 year old gran a remarkable old girl that travelled with the family to see Abbie & Alex get married, after a quick loo stop and they all headed into the little chapel where they were serenaded by Aldo with Nessun Dorma, although there was no danger of any of the guests sleeping while they waited for Abbie.

Abbie came into the chapel looking absolutely stunning in her lace wedding dress & Jimmy Choo’s to the lovely piece “Ballarde pour Adeline” and was accompanied by her uncle John who was giving her away, and once she reached the alter Pauline placed Abbie’s hand in Alex’s.

As I closed the chapel doors to stop the sunlight spoiling the photos, outside we set about laying the table in front of the chapel for the drinks and lunch after the ceremony, the tall cypress trees provided lots of wonderful shade which would keep everyone cool during lunch. I collected the doves from their safe hiding place and put them outside the church hoping that the family cat wouldn’t get them before Abbie & Alex had a chance to set them free.

When I finally went back into the chapel there wasn’t a dry eye in there, the ceremony had been so moving and intimate that it touched everyone.

As Abbie & Alex came out into the sunshine their guests collected handfuls of rose petals to shower the happy couple with. Then Fred stepped forward with the doves and Alex & Abbie set them free with the their wishes another emotional moment for everyone.

And then the Prosecco started flowing, fried zucchini flowers, grilled courgettes stuffed with cheese and mini pizzas were handed round while the guests chatted and celebrated with Abbie & Alex.  After a few photos they all sat down to a delicious lite lunch under the shade of the huge cypress trees serenaded by Aldo.

Later in the afternoon I headed over to the Wine Resort to start the preparations for the evening do, leaving Amy in charge to get them to Sant’ Antimo, one of my favorite places in Tuscany for some more photos and to get everyone back to the wine resort in time for the aperitivo and dinner.

I love the wine resort it’s a perfect venue for a wedding and is so chic, a real haven for the discerning traveller that likes their creature comforts and the views are amazing too, in fact I could move in there tomorrow it’s so lovely!

It’s run by Manfredo who is the owner, he speaks perfect English (his wife Sarah is English) and he produces fab wines too. Nothing is ever too much trouble for him and his staff and they make sure that the guests have a memorable time. Manfredo helped me blow up the balloons with the helium gas, and no we didn’t play the Donald Duck game with it, we were tempted but are far to professional for that! ;-D

Abbie, Alex & Amy were the first to arrive back and after a quick freshen up were ready to have some more photos taken in this beautiful setting, the rest of the guests arrived and joined them for cold cuts and cheese and more Prosecco while they watched the sun go down, and I lit the candles and arranged the flowers on the table, I’ll think you’ll agree that it looks pretty amazing. 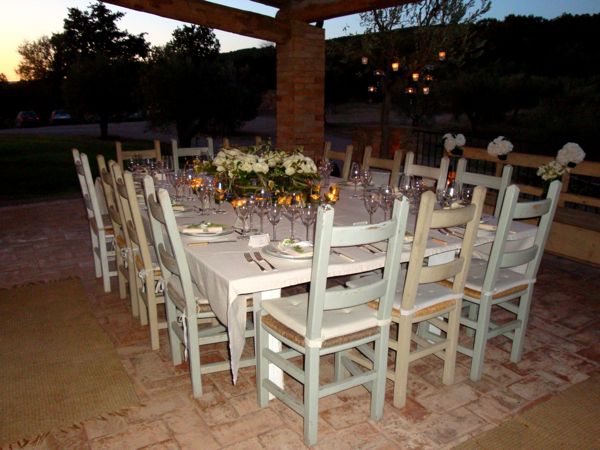 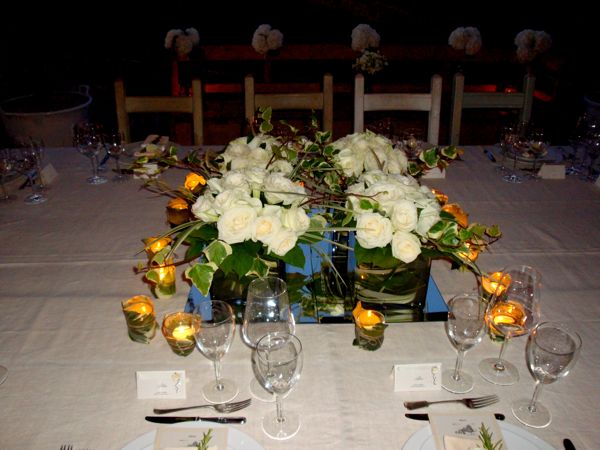 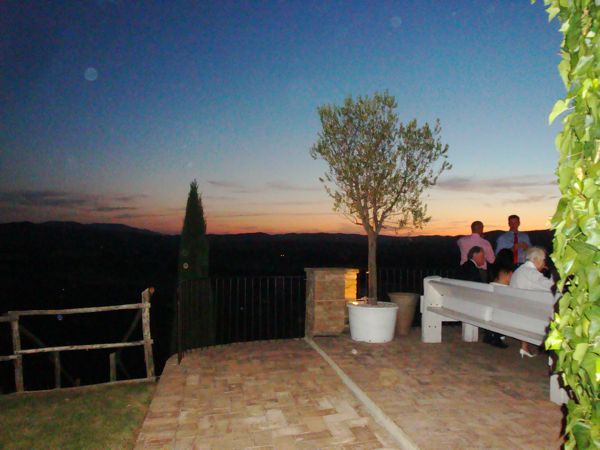 As the guests came round the corner to the terrace where the wedding dinner was being held, there were gasps of surprise, I think that after such a splendid day they didn’t think there was much left that could surprise them. After an opening speech by Alex they settled down to have a delicious dinner and to reflect on their fabulous day full of wonderful experiences.

When I went to pick up Alex & Abbie on Tuesday to bring them up to Siena, as we left the wine resort Abbie shed a few tears, her wedding had exceeded her wildest dreams and the words that she used to describe it were, “magical, amazing, out of this world, fantastic”a wedding that united already close families and deepened the relationships that they already had.  It’s always lovely to hear these comments after a wedding, and as a wedding planner I strive to make each wedding even more special than you could ever dream it could be.

You may be wondering why there aren’t many pictures on this blog, there are three reasons for this, generally on the day of the wedding I don’t have much time to take them, secondly I’m a much better wedding planner than a photographer as these photos here prove and thirdly the photos that Amy took are so gorgeous that you should pop along and have a look at some of them by clicking here. They’re stunning and I keep popping back to have a look too!

Once you’ve seen the photos you may be wondering how you too could have your wedding at “the moon on the stick venue” the owner of the property is happy to have a few weddings each year but you’ll have to book me in order to find out where it is exactly.;-D